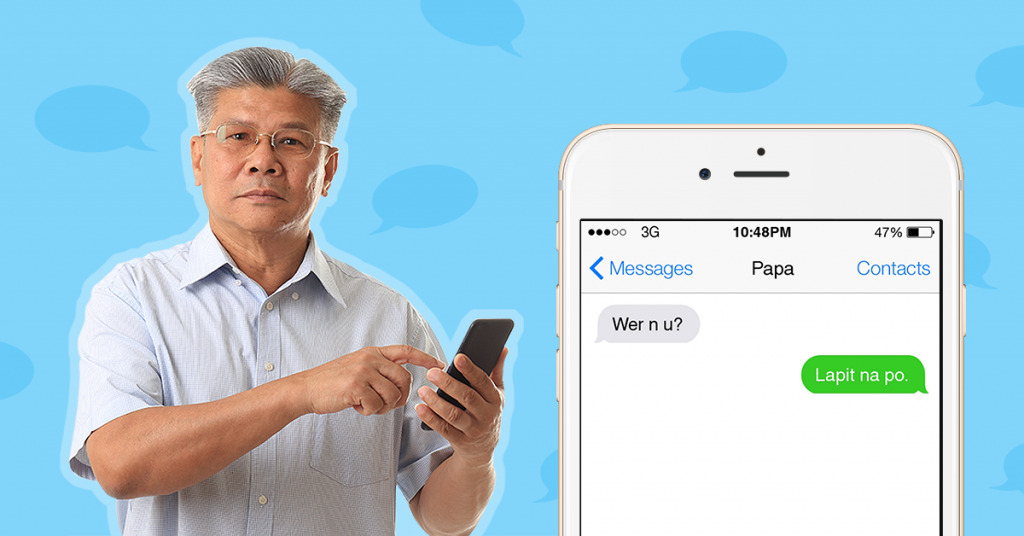 Your phone buzzes and then you look up and see ‘Dad’. You know what this SMS means. It’s a reminder for you not to stay out too late or to stay safe on your commute. Sometimes, you even get the odd text like, “Ma, I’ll be late,” which, of course, is originally intended for your mom. Whether it’s a funny wrong send or an important reminder, when it’s dad who texts, you pay attention. You don’t ever want to miss an important message from your old man. This Father’s Day, we round up several adorable and sometimes terrifying text messages that pop usually sends.

1. “Wer n u?” or “San k na”
To which you reply, “Lapit na po,” even if you’re at least 30 minutes away from home. This isn’t the text you want to see when you’re stuck in traffic after an unplanned gimmick and you’re about to miss your curfew. It seems like dad has the most impeccable timing when sending this SMS. Then again, he’s really just concerned about your whereabouts and would love for you to be home.

2. “K”
This is not entirely exclusive to dad. Mom usually sends this, too. But you understand that this single-letter reply—in all caps no less—means simply that: It’s fine. It’s not being stern, but it probably means that dad is too busy to type a long reply or give you a call. This is contrary to mom’s version of this brief text message, which can mean a number of things ranging from I-don’t-get-what-she-means to I’m-going-to-scold-you-later. In dad’s world, “K” just means okay.

3. “Sino kasama mo?”
Such a short question, but this is another SMS that can scare you especially if you’re with someone whom dad doesn’t approve. Sometimes after contemplating for a few minutes, you send a list of names that dad recognizes even if they’re not really with you. Do him a favor and just tell the truth, will you?

4. “Anong oras kita susunduin?”
Dad is probably the only one willing to brave the horrendous traffic just to pick you up. You can count on him to fetch you from school or rescue you from an awful party even if it means he will miss catching his basketball game on TV.

5. “Tanong mo sa mama mo”
This is when dad plays safe. You’re most likely asking permission to go somewhere or do something that he’s unsure if mom will like. This can also mean he doesn’t want to play the bad cop and he wants mom to be the one to say no to you. Well played, dad. Well played.

The next time dad sends a text, know that he only means well, and he hopes you text back. Never run out of load to reply to your dad with Coins.ph! Learn more here: https://coins.ph/buy-load. Freelancing inspiration to get you startedLifestyle

Here’s how much Filipino gamers make from e-sportsLifestyle